A generator is a machine that basically converts mechanical energy into electrical energy.

It is based on the principle of “electromagnetic induction” discovered by Michael Faraday, a British scientist in 1831.

The discovery was that if an electric conductor, like a copper wire, is moved through a magnetic field, a flow of electric current will move in the conductor.

Generators are made in a wide range of sizes, from very small machines with a few watts of output power to very large power plant devices providing gigawatts of power.

The movie here shows a simple electric generator. In the movie, the mechanical energy needed to turn it comes from the brown hand crank at the front of it.

In a hydroelectric power plant, the mechanical energy to turn the generators comes from the water turbine, which is turned by the force of falling water.

The hand crank in the animation causes the red wire to spin inside a magnetic field (the blue lines). As Faraday learned, moving the wire through the magnetic field causes an electric current to flow in the wire.

The turning red wire is connected to a voltmeter, which shows the amount of electric current that is produced. In a hydroelectric plant, the generator is connected to transmission lines that deliver the electricity to your home or business, and that’s my friend how a generator works.

A Large scale deployment of Generator is pretty much the same as a small one, just take a look at the picture below showing the generator they use at the Hover Dam located at the black canyon of the Colorado River. 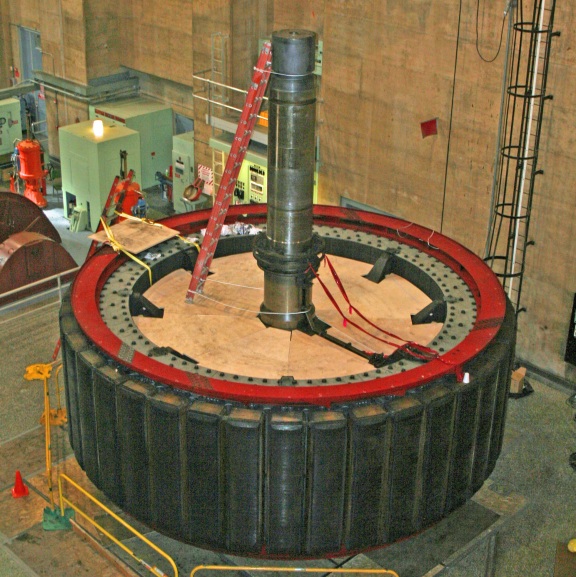 This large scale generator uses the same principle as the one in the video in order to produce electricity.